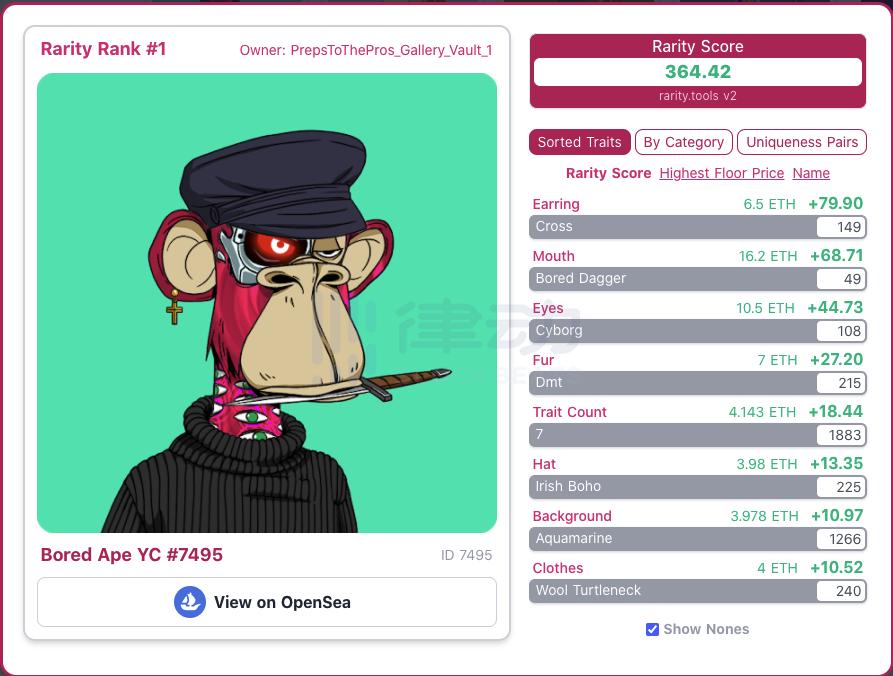 What Are NFT Rarity Traits?

Experienced NFT investors are aware of the qualities that constitute a great project. These include awareness of the founders' identity, the quality of the artwork, the size of the community, trading volume, and the project's utilities. Once a good project is identified, successful traders seek out the rare NFTs in the collection.

What Is Rarity In NFTs?

NFTs are a collection of generative art containing a few hundred to 10000 pieces. The NFTs in a project have a similar appearance, but each has different traits. For example, in the Bored Ape Yacht Club (BAYC) project, there are 10000 NFTs. Though each Ape looks similar, they have different eyes, clothes, fur, hat, mouth. All of which give each NFT a distinctive, unique appearance. Some of these traits are less common and considered rare. Numerous rare traits within a specific NFT increase the overall rarity, ensuring a high value.

In the BAYC collection, the Bored Unshaven Pizza Mouth appears 26 times in the 10000 NFTs; it's a rare trait. In contrast, an Ape with no earring appears 7023 times and is common.

On project launch, it's impossible to see the NFTs and no way of knowing the rarity; buyers are given NFTs at random. Following the launch, it becomes possible to view the NFT and determine the rarity. Typically in a 10000 collection, there'll be a few hundred rare with the remainder common.

For investors, it becomes essential to appreciate the rarity factor. The rarer an NFT, the more valuable the digital asset. There is a massive difference in the sale price of regular NFTs and the rare items in the collection. The normal NFTs are near the floor price (i.e., the cheapest one in the group), while the scarce items are 50 to 100 times the floor piece.

Rarity consideration is not just important for those wishing to buy NFTs; it's essential for people wanting to launch their own NFT project.

Looking at the iconic CryptoPunks project, one reason for the massive success is the concept of rarity. The same principles from trading cards are used, the number of NFTs in the collection is limited, and some NFTs are rarer than others.

A limited number of NFTs combined with rare items within the project excite the collectors; people become more interested. In the CryptoPunks collection, there are a few unique NFTs, considerably more valuable than others. The success of CryptoPunks has laid a model for NFT projects to follow.

Follow the following strategy to create rare NFTs for a collection.

Trait Category. There may be, for example, five trait categories. This could be clothing, hair, mouth, background, and earrings. Each one of these categories would have a certain number of specific traits. For example, there could be seven different types of Mouths. The particular traits vary in frequency; some projects have as many as 40 to 50 per trait category.

Unique Traits. These are traits that fill each of the specific category items. From the above example, there would be seven different types of mouths. These could be Bubblegum, Cigar, Cigarette, Grin, Tongue out, Unshaven or Rage. These unique traits may appear only 200 times in a 10000 collection and become rare.

Rare Traits. These are unique traits that appear less than one percent of the time in the collection's total number. For example, in the BAYC project, Bored Unshaven Pizza Mouth appears 26 times in the collection of 10000 and is ultra-rare, a highly prized trait.

How To Go About Finding the Rarity?

There are numerous ways to determine rarity. These include :

Trait Rarity Rank. The rarest traits of NFTs in the collection are compared, the one with the lowest number determined as the rarest.

Average Trait Rarity: This calculates the average number of rare traits in an NFT. If an NFT has three traits and the rarity of these traits are 10%, 20%, and 30%, the average trait rarity is:

Statistical Rarity. Here the rarity figure for each trait is multiplied to give an overall figure. For example, if an NFT has three traits and the rarity is 10%, 20%, and 30%, the statistical rarity is:

Rarity Score. While the above three are helpful, the Rarity Score is considered complete and is the most popular formula for making a rarity assessment. The total rarity score for an NFT is defined as "the sum of the rarity score of all trait values."

Rarity Score for a Particular Trait Value calculated by the formula:

It's very time-consuming to look through each NFT to determine the rare NFTs within each collection. Luckily there are tools to help; the most popular one is:

Rarity Tools can be used to find the high-value NFTs. It will help to determine the potential sale price of the NFT. It also provides the means to assess the rarity of NFTs from a newly launched project.

Rarity Tools is a popular tool, and all the major projects are listed on the Rarity Tools website. As NFTs became, popular more tools have appeared. Other tools include:

It is usual for smaller, lesser-known NFT projects to list their collection under one tool. For a broader experience, it's necessary to use and become comfortable with the numerous tools.

The rarity of an NFT is an essential consideration but determining the demand for a project and future projection is more critical. It makes no sense to buy a rare NFT from a project with limited interest in the market. However, a combination of a successful project and a rare NFT is a winning strategy for trading NFTs.